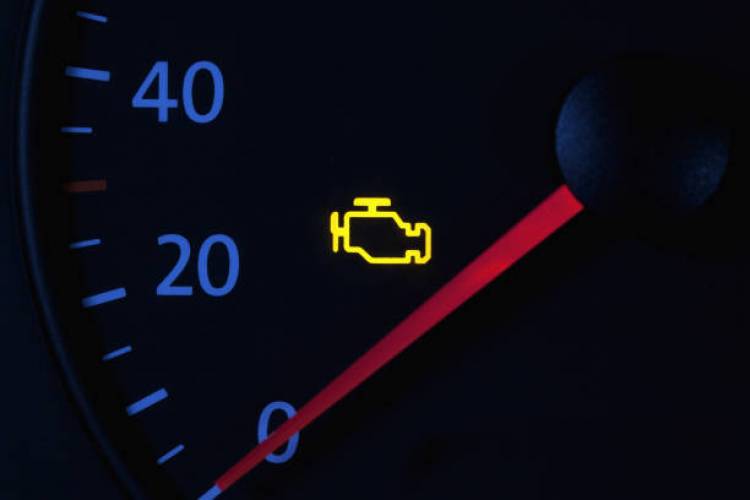 Unfortunately, car won’t pass inspection with “Check engine” light on. One of the first steps in a car inspection is checking for the engine’s light.

If it is on, the inspection is over, and in some cases, you might need to pay a fee to book your car for the next inspection date.

The malfunction indicator lamp is the formal name for the light. It is e clear signal from the car’s computer that something is wrong.

It is strongly recommended to visit your car dealer and resolve the issue as soon as possible.

In most modern cars, the warning can be recognized by its yellow color, engine-shaped form on the dashboard. It may not have an integrated “check” word into the design, but it is easily noticeable.

Sometimes the engine light can come on even if there is nothing wrong with the engine. It’s a rare and temporary occasion, but in that case, it shall turn off itself in a short time.

However, there is a simple way that you can turn off the light just for the inspection and handle the problem later.

You can disconnect the battery for around 30-40 minutes. All codes will be restarted, and you will have more than 40 miles before the computer receives the error messages again.

This is not recommended as you might not have 40 miles left to drive, considering that your issue might be related to the engine or emissions.

As you now know that passing car inspection with that light on is impossible, let’s review what could be the causes.

The car’s engine light on your dashboard can be a result of a minor issue, or it could be something much more severe. Here are repair operations that mechanics claim to be an ideal resolution for a car’s engine light.

The estimated repair cost for each of them is around $300 to $400. It could be more or less, but it is recommended to pay attention and resolve it as soon as possible.

The ignition coils provide the spark that fires each of the plugs in the engine. It is directly connected to the top of each spark plug or separately linked to the plugs with plug cables.

Regular maintenance is required over the years. Otherwise, it will break sooner or later.

This is not one of the items that need regular maintenance, but it could be the reason for your check engine light.

The oxygen sensors are monitoring the amount of oxygen in the exhaust and provide the information to the engine computer.

If there is no feedback regarding the amount of oxygen, your engine check light might inform you.

The car’s fuel injectors are part of the system that delivers fuel to the engine’s combustion chamber.

For the engine to run smoothly, the right quantity of fuel and air must be provided.

This is precisely what the fuel injectors are responsible for, and it is a huge possibility that they are causing your engine light to glow.

This is one of the critical objects of an electronic fuel injection system.

A common problem with the MAS (Mass airflow sensor) is that they can get damaged or contaminated.

It can also cause the engine to crank but not to start.

If there is a hole in the MAS itself, the engine can go out in low revs.

The ignition coils or “spark coils” are that part of the system that transforms the low voltage of the battery to thousands of volts required to create an electric spark to ignite the fuel.

The thermostat is responsible for the car’s engine temperature regulation.

It is located between the car’s engine and radiator.

It regulates the engine’s coolant flow to the radiator.

If closed, the coolant flow will not reach the radiator, which will lead to a rapid increase in the engine’s temperature.

So if your engine check light is on, make sure to observe the engine temperature, as this might lead to an engine overheat.

The purge valve is a part of the (EVAP) Evaporative emission control system.

It is preventing the vapors in the fuel tank from escaping into the atmosphere.

The control valve itself is regulating the vapor fuel amount that is purged from the charcoal canister.

A common problem might be that the valve is stuck or cannot close fully, causing the check engine light to come on.

Keep in mind that even after the repair, if your car dealership mechanics did not restart the car’s computer, the check engine light might remain on for a few days. It takes time for the computer to run the inspection and return the gathered information.

In some modern car designs, the check engine light on your dashboard can remain solid or blink. If the indicator is blinking, the issue is serious! There is a high possibility of unburned fuel to dump into the exhaust and increase the catalytic converter temperature to dangerously high levels.

If the light is steady, it is not an emergency. You can keep driving, but you should pay attention as soon as possible.

And the conclusion is that that light is just like tooth pain. Once something is wrong, it will warn you.

But if there is no action taken regarding it, it may lead to severe consequences. So if you see your check engine light on, make sure to schedule an appointment with your local car dealer.