Some drivers complain that they can hear noises from the front of their cars. Often, they also see something hanging under the car’s front.

What Can Be Hanging Under The Front Of The Car?

You may notice something hanging under the front of the car. Let’s see what it can be!

There are several types of protective trays that are attached underneath the car. They help to protect components below your car and prevent rust from occurring.

If you see something hanging under the front of the car, it can be your car’s plastic guard trays that need to be fixed.

These garbage and plastic bags can remain stuck underneath the car. Most of the time, you notice something hanging under the front of the car, you can remove it.

In addition, you can reach out to a local mechanic to lift the car and get rid of the hanging plastic bags.

Some cars come with an anti-static strap attached to the bottom of your car. It will help to prevent and protect your car from getting electric shocks.

If you see it’s damaged and hanging under the front of the car, you need to take care of it immediately.

Most cars have a metal or plastic splash tray below the engine to guard the debris and water getting up into your engine bay.

If they are getting damaged, they can look like a large object hanging under the front of the car. If you see them like that, you need to repair them as soon as possible.

Your exhaust parts can be another thing hanging under the front of the car. It may happen when the support brackets or pipes are broken.

So, it does not have the strength to remain in its place if you hit a hole or bump on the road. Fixing your exhaust system will protect your car from further damage and prevent accidents.

It guards the latter against road debris and prevents dust, water, nails, and small rocks from reaching your engine directly. So, it protects it from harsh road conditions.

So, if you find something hanging under the front of the car, it may be an engine splash shield. Its function is to take a beating.

You will have to replace it at least once during the lifetime of your car.

Hence, when your engine splash shield gets worn out or damaged, you need to replace it as it protects the sensitive parts of your engine.

Can You Drive With Something Hanging Under The Front Of The Car?

Every time you start driving your car, you hear a terrible screeching sound coming from below. It has been a few days now.

You don’t have time to get it checked and are worried if it is safe to drive.

A plastic bag or loose guard tray can cause eventual rusting. Driving without it, though, is relatively safe.

But, if it’s a metal plate, sort of something hanging under the front of the car, then it could be an exhaust heat shield that has come loose.

It is advised to get it checked and fixed quickly.

Driving over a field with a broken heat shield can cause fires due to no heat protection. It can get dangerous. 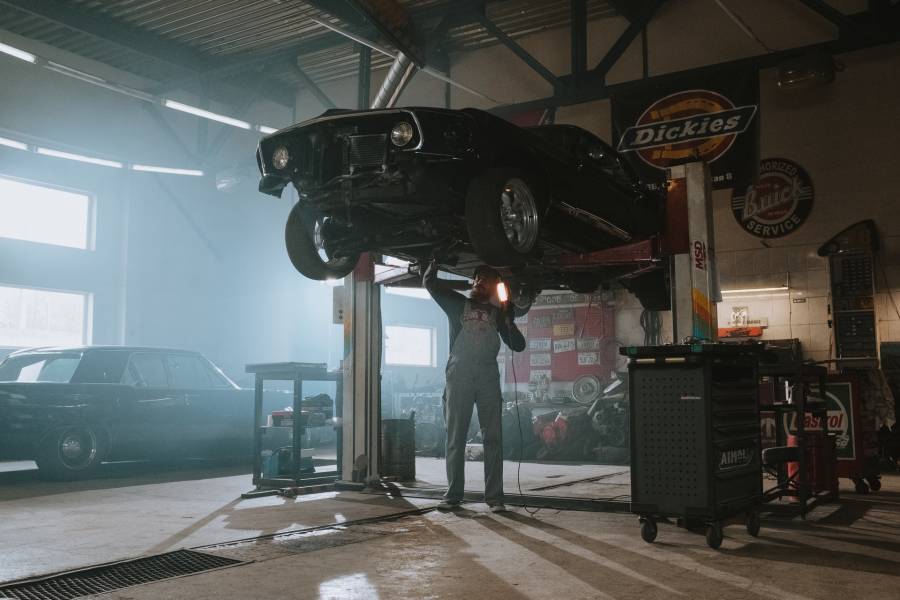 The scraping sound you hear may come from damaged metal splash trays.

Although driving without them is safe, debris of dirt and water can pile up in your engine bay, damaging it. So it is advisable to repair it to protect the engine from wearing out.

Damaged engine splash shields also look like something hanging under the front of a car. They have the same effect as damaged splash trays.

And so, must be taken care of without further delay. Most people claim to have driven years without checking for the scraping sound.

But, it is better to be safe than sorry. So get the weird sounds your car is making checked right away!

What If I Scrape The Bottom Of The Car?

Sometimes, we get into minor accidents like bumps or scraping along the curb. Most of the time, it’s something minor.

But sometimes, it can result in something hanging under the car. So what could be the possible damage in these cases?

Damage To The Driveshaft

A single blow to the driveshaft can cause u-joints to fail. It happens when the car is thrown out of balance.

You will hear rattling and intense shuddering while driving.

Continuous damage to the suspension system can result in sloppy steering and handling.

It happens as the suspension bushings wear out. The car will sound noisy while driving.

The rocker panels or front bumper may get damaged after minor accidents on the road. But, they can cause corrosion over the years and are expensive to repair.

Constant scraping the underside of your car can remove the protective coatings on some metal parts.

And so, these parts get eroded easily. Eventually, they may fail and stop working altogether.

When your car takes hits often, the plates and shields protecting the bottom of the car become loose. They may look like something hanging under the front of a car.

Depending on the damaged protection, you may have to fix it immediately to avoid danger.

A fluid leak is a common problem of people who constantly race over speed bumps and scrap their car around.

A car’s wheel alignment gets thrown off easily. Constant bumping can damage the front-end alignment.

It can cause decreased gas mileage, and increased tire wear as handling the car gets more complicated.

Speeding over a curb or speed bump is quite common and unavoidable during daily drives. But constant repairs and checks can save the car from long-term damage.

You can easily protect your car from minor damages like corrosion.

What Can I Do If Something Is Hanging Under The Front Of My Car?

It is essential to secure and check the shields and trays to prevent something from hanging under the front of the car.

If a mechanic provides regular customer service to your car, they can pick up problems immediately before they transform into big ones.

So, if you have something hanging under the front of the car, repair it when you have time on your hands and get in touch with your local mechanic.

These items only need replacement with brand new ones most of the time.

There is no reason to panic when you see something hanging under the front of the car.

You can contact a mechanic who will look into the problem and repair it accordingly. It will prevent future accidents and future damage to your vehicle.