RPM meter goes up when you accelerate and comes down when the car slows down. RPM stands for Revolutions Per Minute, and it indicates how many times the crankshaft revolved to produce engine power.

What Is Low RPM?

When the engine runs fast, RPM goes up, whereas an engine running at low speed causes the RPM to fall. In most of the meters, 1000 revolutions are denoted as 1X.

The engine RPM proportionately fluctuates with the speed of the car.

Idle vehicles with an RPM rate signaling below 600 RPM are called low RPM vehicles. The IAC (Idle Air Control) valve is responsible for the engine’s idle speed and keeps it constant.

If the engine’s idle speed is not constant but is increasing and decreasing, it is known as surging. At low RPM, you can feel the vehicle shaking or vibrating; that’s also a sign of surging. There may be two situations of surging at low RPM.

The most common one is when in an idle state, a vehicle begins to surge at a low RPM. In the second case, the car is likely to move at a slower speed with a low RPM, which causes it to surge. It will also produce some odd sounds while surging.

Let’s find some reasons for this kind of surging along with their solutions.

Surging at low RPM may be a sign of a bad IAC (Idle Air Control) valve. To accelerate a car, the air is mixed with the fuel in a proper ratio. This air and fuel mixture is then injected into the engine, which blasts with the spark plug. This blast generates the power to run the engine. IAC controls this air intake.

IAC is situated near the air intake compartment and is controlled by the car’s computer. This computer adjusts the IAC to adjust the idle speed. This adjustment takes into account many measurements like engine temperature, electrical system load, air temperature, and throttle position.

When you accelerate the IAC, letting in more airflow, it mixes with plenty of fuel and air to inject inside the engine and gain thrust. This, therefore, causes the RPM to drop, which causes surging. It may lead to a bad IAC valve condition, clogging, or seizure to work.

A vehicle diagnostic computer system or a qualified mechanic can diagnose it. Replacing the IAC valve is the only solution to this as it cannot be repaired once clogged.

When air is adequately mixed with fuel, the fuel injectors inject the fuel inside the piston cylinder. A perfect mixture of fuel and air injected timely produces a complete blast with spark plugs. Injectors are, thus, very important.

Clogged or faulty injectors can not inject the fuel mixture timely and adequately in the piston chamber. It causes the RPM to fall, which leads to surging.

It may lead to extra fuel consumption while riding as most of the mixture gets wasted during the injection. Also, it can cause an unpleasant ignition, low RPM, and a lack of power while throttling. You can count on a qualified mechanic to fix it by cleaning the clogged injectors. 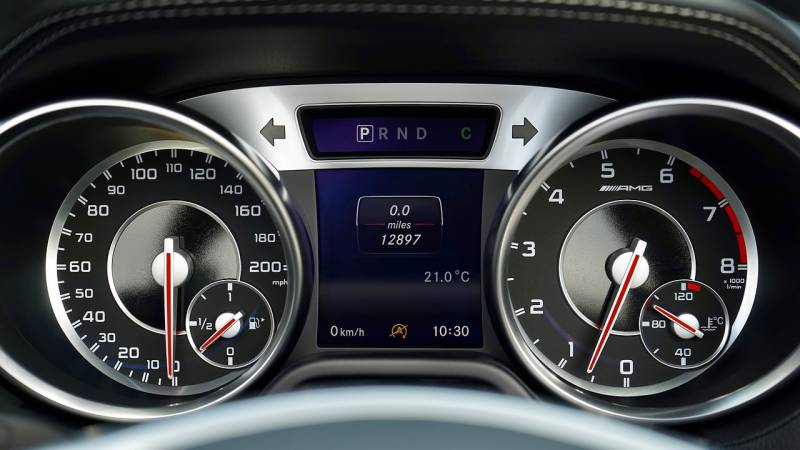 The fuel pump sucks the fuel from the tank and sends it to the mixing chamber. Over time, a fuel pump might clog, undergo wear and tear, and may seize to work.

A faulty fuel pump can hinder proper fuel mixing, causing low RPM and surging. You need to clean and reinstall the fuel pump for optimal performance.

A fuel filter is a part that filters the fuel for any contamination before being mixed. However, over time, a fuel filter can suffer clogging, leading to interrupted fuel flow.

This marks as one primary reason for vehicle surging. It might also lead to a difficult starting of the engine and sometimes a backfire. Replacement of a fuel filter can, nevertheless, help the cause.

There are many sensors within an engine that are used by a computer for proper fuel mixing. For instance, the temperature sensor measures the engine temperature. A cold engine needs a thick mixture to start the vehicle, whereas a heated engine requires regular mixing.

A faulty temperature sensor can mislead the computer to prepare the wrong mixture for the engine. This bad mixture can cause surging and low RPM. Again, the air sensor detects the amount of air in the engine. Based on it, the computer prepares the right mixture with the air.

If this sensor acts faulty, more fuel will be used. A bad mixture also creates surging and low RPM. Replace these faulty sensors for a smooth and constant vehicle startup and a steady RPM.

This essential part of the engine sparks at the right time to burn the fuel for maximum power generation. With time, carbon may clog on the tip of the spark plug, which may cause a lousy spark or no spark at all.

A faulty spark plug can cause high fuel consumption, difficulty starting, and surging. A mechanic may decide whether to clean it or replace it with a new spark plug.

An easy startup and a smooth driving experience are what every driver wishes for. Every vehicle needs proper tunings and periodical checks for continued seamless performance. Modern cars are mostly computer-driven, so a diagnostic computer scan can spot most of your vehicle’s problems and faulty parts.

Car surging at low RPM is a common problem with vehicles. In electric cars, it may be indicative of a problem in the wiring or the electronic components. Replacement is always a better solution for electrical issues. However, if it comes to mechanical parts, there may be other solutions too.

Don’t make haste deciding about replacing the components of your vehicle. Let an experienced mechanic guide your actions.