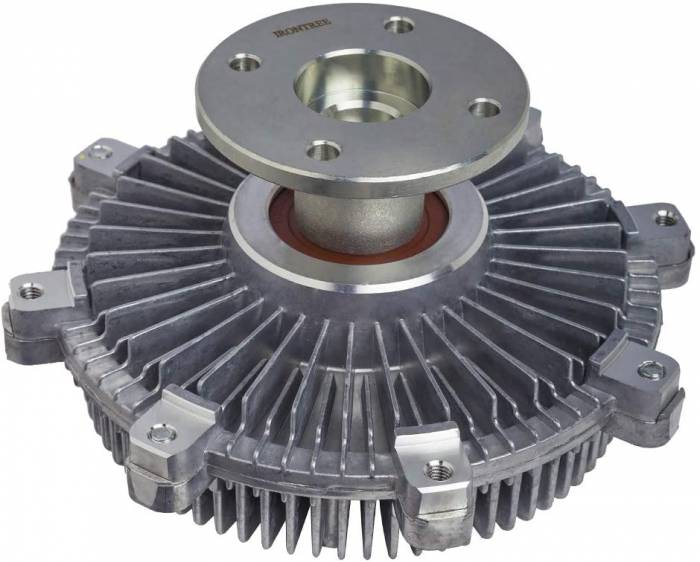 Before you can answer that question, first you need to understand what is a fan clutch. The engine in your car generates a substantial amount of heat, and the assistance of cooling fans is required.

The fan clutch is a thermostatic device that is operating based on temperature.

The normal operating temperature for an engine is around 90-95 degrees celsius. The fan clutch is designed to adjust automatically depending on the heat the engine is producing.

The fan clutch for around $180 is capable of maintaining 80-85 degrees celsius constant temperature.

In most cases, it is mounted to the fan and on the water pump or any other belt-driven pulley. The fan clutch is spinning freely until the temperature reaches a specific heat level.

Then it will engage the clutch and will allow the fan to perform efficiently.

The exciting thing about these fans is that their RPM depends on the temperature.

That means that when there is no excess heat, the fan can work at lower speeds to lower the engine load. However, when the temperature reaches a certain level, the fan will start cooling at higher speeds.

Do not panic if you hear your engine fan “howl”, because this is the sound of the fan engaging its full operation speed at a temperature between 95-100 degrees celsius.

However, this is when the engine fan is cooling the engine, and once the temperature goes down, the “howl” sound will go away because the fan clutch will disengage.

The good thing about the clutch fans is that the process will repeat until the engine reaches higher temperatures than recommended and makes sure to prevent overheating and further issues.

It is not necessary to hear the “howl” sound even if your engine temperature is above 100 degrees celsius because the fan still hasn’t accelerated at its full speed.

But once it is guaranteed that the fan clutch will not rest if the temperature goes over 101 degrees celsius.

There are a lot of different models of fan clutches! Each model engagement temperature is different, but most of them will start once the temperature is 70 to 100 degrees at the clutch’s face.

That type of fan is available in thermal and non-thermal operation. They are, however, the most efficient form and engine fans.

When the temperature reaches around 160 degrees Fahrenheit, the spring expands, and it releases a chamber that is allowing the silicone to flow to the clutch.

Then the clutch is engaged, and it turns on at about 70 to 90 percent of its full capacity.

At this point, if the vehicle begins to speed up, a substantial amount of air will start passing through the radiator and cool it down.

A bi-metal is located on the front of the fan that will expand or contract based on heat from the air that is continually passing through the radiator.

The volume of the air is cooling down down the bi-metal, triggering it to disengage.

When this moment occurs, the fan turns down nearly to 20 percent of the seep, as it is not needed anymore.

There is a more economical alternative! The non-thermal fan clutch is your lower-cost option, but they require more power to operate and don’t lat as long as the thermal clutches.

Non-thermal clutches are working at lower speeds and are less effective.

As you now know, the temperature that is required for the clutch fan to start operating and the difference between the main two types of clutches. It is time to review some common symptoms that your clutch fan is failing.

Suppose you notice that your vehicle is experiencing one of these symptoms presented above. In that case, the recommendation is not to way until it is too late and inspect the vehicle’s cooling system.

Before we conclude, I must mention that the fan clutch can produce a loud noise until both the engine and the fan are still cold.

So any disturbing notices should not be a reason to worry.

In general, It is essential to know that if there is a dysfunctional component in your cooling system, it can cause overheating and permanent damage to the engine.

Ensure that your engine is cooled down properly and drive safely. The repair may cost you much more than regular maintenance.