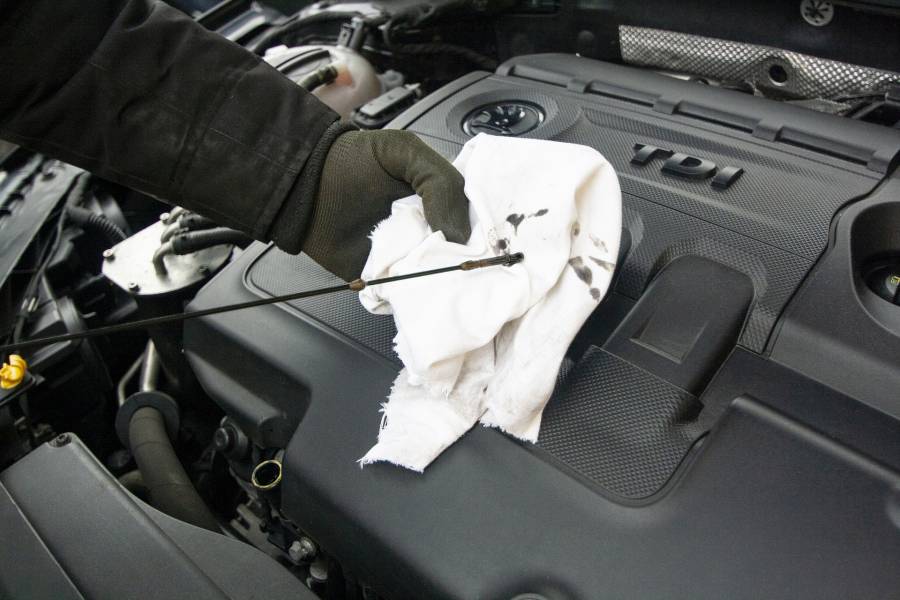 Oil dipstick serves an essential purpose to the vehicle. However, it can be hard to read sometimes.

Because of this, the car owner might not have accurate information on the engine oil, which could cause a ripple effect of repercussions that no one wants.

An engine oil dipstick can be challenging to read due to many reasons. This article highlights these reasons and what you should do as a car owner in such a situation.

Here’s What You Should Know About Your Engine Oil Dipstick

Most engine oil dipsticks aren’t calibrated; hence reading them might be daunting.

While some dipsticks have C(Cold), H(Hot), Max, or Min markings, others have just two different holes or dots on them.

The C and Min indicate when the engine lacks oil, while the H or Max shows too much oil.

For dipsticks with separate dots, the dot closer to the pointy end is the “low” indicator, while the far end is the “high” indicator.

Ideally, car owners should fill their engines with oil to stop between the high and low oil level indicators.

It is because if the engine oil level is too low, the engine could overheat or knock, and if it’s too high, the engine swims in oil and causes leaks and other damages.

Why Your Engine Oil Dipstick Is Hard To Read

Multiple reasons can make your engine oil dipstick hard to read. Here is a handful of them.

Sometimes, when the engine’s oil is too clean (which is good), it looks transparent on the dipstick. If your engine oil is clear, it’s probably because you recently got an oil change.

Unfortunately, the transparency of the oil makes it problematic to decipher its level on the dipstick.

In addition, there is no color contrast between the engine oil on the dipstick, so you can’t see where the oil ends.

You Don’t Know How To Read A Dipstick

Dipsticks are relatively easy to read, so if you’re having trouble determining your engine oil level, it’s because you don’t know how to read a dipstick.

Dipsticks are not calibrated like measuring tapes or rulers; however, as previously highlighted in the “what you should know about dipsticks section,” they have two markings that give you a general idea.

These markings could be C and H, Min and Max, or two dots separated by a space.

The goal of the car owner is to fill the oil to the midpoint between these two markings (points). It is the ideal engine oil level, so keep that in mind.

The Color Of The Dipstick

For most cars, the color of the dipstick isn’t in contrast with the engine oil. It’s like putting two similar colors together and trying to figure out where one stops and where the other begins.

Most dipsticks are made of silver metal, and when next to clear engine oil, seeing the engine oil level might be tricky.

You’re Checking It At The Wrong Time

One of the best practices here is knowing when to check for oil levels, and no matter the color of the oil, check your engine oil level before starting the car for the day.

The engine is cold because the vehicle has been sitting for hours, and the oil grips better to the dipstick.

Therefore, checking the engine oil level after driving the car is futile. It is just one of the reasons your readings might be useless or inconclusive.

The Dipstick Doesn’t Have Grooves

The absence of these grooves makes it hard for the engine oil to stick to the dipstick, resulting in inaccurate or inconsistent readings. 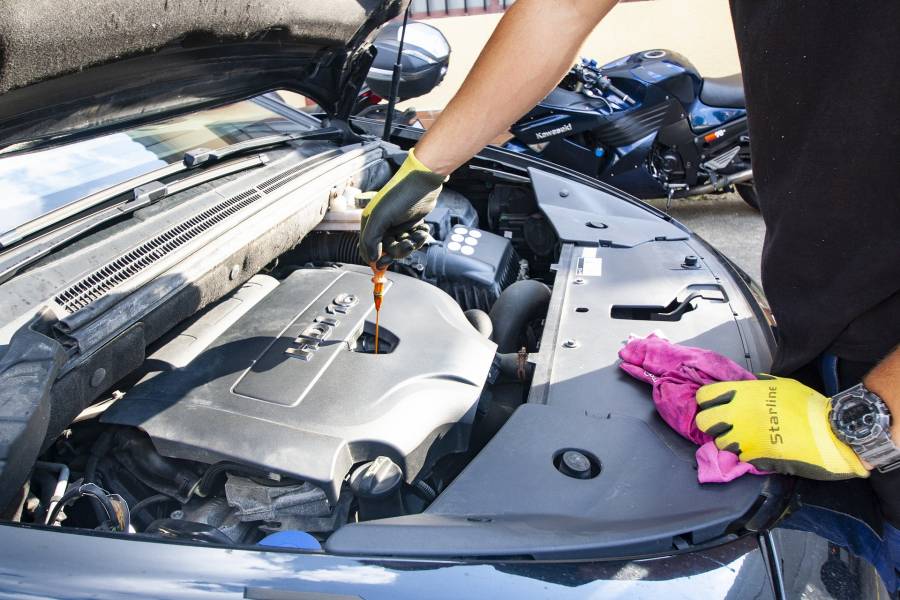 There are many things you can try to increase your proficiency in reading dipsticks. Here are the most straightforward methods.

Scratch/Make A Mark On The Dipstick

A lot of the problem with reading an engine oil dipstick is that it doesn’t hold the oil when you remove it.

Hence, with the rough end of a sponge, a file, or via concrete, scratch one side of the dipstick to get rough, and this should make the engine oil stick better to it.

This way, you can quickly check the oil’s point and have an accurate result.

Check When The Engine Is Cool

If you check the engine oil level on the dipstick before turning on the car itself, there’s a greater chance that you’ll get better readings.

However, something about a hot engine and engine oil makes reading a dipstick hard.

Hence, please turn off the engine and let it cool for some hours before checking it or do it before you put on the car altogether.

If you can’t seem to read where the engine oil level is after removing the dipstick, take a clean cloth and wipe the oil from the dipstick.

After this, stick it back into its hole, wait 30 minutes and remove it again. It should help you recover the accurate level of the engine oil, and it is done on a cold engine.

Sometimes, simple hacks like this are all you need to read the information on the dipstick.

Use A Paper Towel

Remember to have a paper towel handy and lay a white paper towel on the car’s hood. Once you remove the dipstick, place it horizontally on this paper towel and wait a few seconds.

Next, move the dipstick on the paper towel a few inches, either up or down.

The paper towel should absorb the oil, and then you can see which part of the markings absorbed the most and least amount of oil. You can try this several times for a concrete result.

Paint Over The Engine Oil Dipstick

With an acrylic or spray paint of contrasting colors like black, red, or blue, paint the end of the engine oil dipstick just by the two markings.

Reading an engine oil dipstick can either be one of the most specific or most complicated things you’ll have to do as a car owner.

However, doing it is vital for the maintenance of your car.

Information on your car’s need for an oil change, an oil top off, a reduction, or oil quality all lie on the dipstick. Hence, you can’t do without knowing.

Indeed, there are common reasons why reading your engine oil dipstick might be challenging.

These reasons range from using clear oil to the dipstick’s lack of grooves or checking it at the wrong time.

However, the insights like painting the dipstick, making a mark, or a scratch on the dipstick will help. Similarly, check for the levels appropriately, use a paper towel, and be patient.

With all these practices,  you can quickly identify the level of your car’s engine oil even with a hard-to-read dipstick.