There are many causes of your engine overheating, and when this happens, it won’t start.

It mostly happens during a long drive, when you are carrying or towing a heavy load, or off-roading.

Most drivers will notice the temperature gauge rising and will still press onto the gas pedal.

Sometimes, depending on the cause of your engine overheating, attempting to start your car can lead to permanent damage.

You’ll need to replace the internals, which is not easy.

It is recommended that when you see the temperature gauge rising, park your car at the side of the road and check why it is overheating.

Signs That The Engine Is Overheating

There are engine overheating signs that you should look for. They indicate that your engine is heating up quicker than usual.

You should never ignore such signs if you want your engine to overheat.

What To Do If The Engine Has Already Overheated

Sometimes it is already too late to notice that your engine has overheated. If the engine has not turned off, find a place to park your car at the side of the road.

Turn on the hazard lights, then place warning triangles behind your vehicle to alert other drivers.

If you can drive for a bit, turn the AC more and crank up the heat. It helps draw heat from an overheating engine.

Thus, you can drive to a safe parking location or even a service station where an auto mechanic can diagnose your car and probably repair it.

If the engine has already overheated, open the hood and let your engine cool off. Working on a hot engine will result in severe burns on your skin.

Do not attempt to pour water, whether hot or cold, on the engine.

You’ll be putting the engine block at the risk of cracking, and nobody loves a cracked engine block except the mechanic.

You’ll pay to get a new one and rebuild the engine for you.

You also have to know that you cannot fix all the issues to drive off. Sometimes your car needs to be towed to an auto repair shop to be fixed or to your home so that you can fix it.

Causes Of An Engine Overheat

It is the first thing you should check if your engine has overheated before diving in to check on other components.

The thermostat will open the coolant valve, thus allowing coolant to flow between the engine and radiator, thus cooling the engine.

Suppose your thermostat was installed wrongly with the temperature sensor facing the radiator. It will only open the coolant valve when the radiator heats up, which never happens.

The engine will overheat and shut down almost immediately with no coolant flow.

If the thermostat is faulty, replacing it will fix the engine overheating issues.

But if it was installed incorrectly, reinstalling it correctly with the temperature sensor facing the engine is enough but ensure you check its condition before reinstalling it.

When changing the coolant, it is recommended that you flush the coolant system to remove any contaminants before filling in the new coolant.

If the coolant system is clogged, there will be a lazy flow between the engine and radiator. The engine will not get the cooling it requires; thus, it will end up overheating. 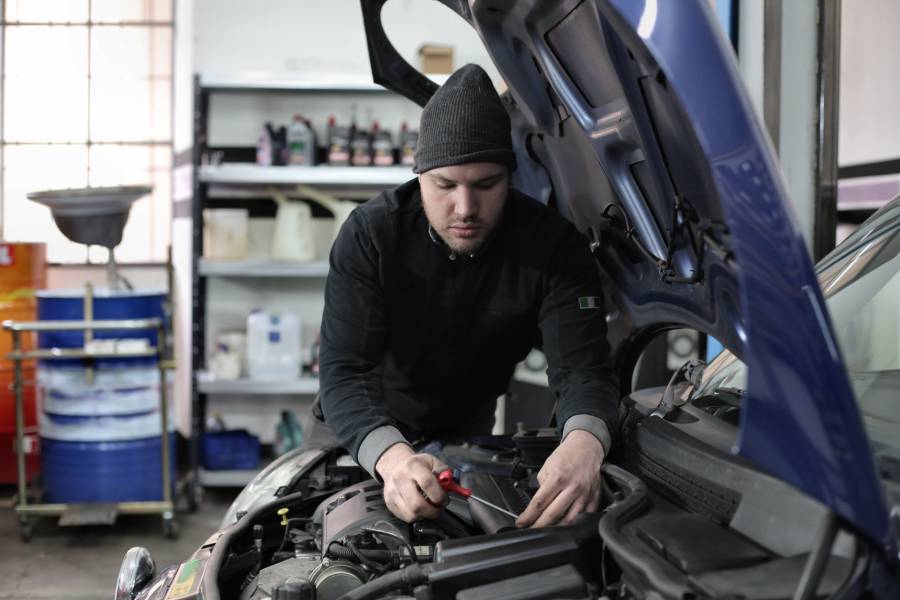 There are other homemade solutions you can use. You check the clarity of the liquid you are using are every flush.

If the liquid you are using is clear or maintains its color, the cooling system is clean.

Little Or No Coolant

Low coolant levels or no coolant will lead to the engine overheating.

When filling in new coolant, ensure you let the engine run for a while so that the coolant circulates, then fill up coolant as the level will go down after some time.

If you are sure the coolant level was okay, the coolant system is leaking, coolant leaks from the valves at the thermostat, the engine, or the radiator.

The radiator and the coolant pipes can also leak coolant. If the coolant is leaking from the valves, ensure they are tightened.

Leaks from the coolant pipes or the radiator will require replacing.

Regardless of how small it is, the heater core also prevents the engine from overheating.

It is like a small radiator that cools the coolant but dissipates the heat to your car’s interior, thus heating it.

When the heater core is faulty or clogged, the radiator cannot cool the coolant coming from the engine; therefore, the engine receives “hot” coolant from the radiator.

The engine will not cool efficiently and will heat up as you drive if only the radiator is cooling the coolant. Replacing the heater core or flushing it to remove the clogs will solve this.

Another common cause for engine overheating is low or leaking engine oil.

When the engine oil levels are low, friction between the internals will increase; thus, the engine will heat up due to this friction.

Ensure that the engine oil is at the correct level and there are no leakages.

Engine oil could leak from a faulty gasket, a loose or missing oil drain plug, missing front and rear seals, and other places on the engine.

Looking around the engine with a bright flashlight will enable you to identify the source of the leak and fix it if you can.

Failure to change the engine oil within the required mileage or period of use will lead to the engine overheating.

Old engine oil is contaminated with impurities, and it will be less dense than it was then new.

Completely draining the old oil and filling the engine with new oil solves this quickly.

You should always check for signs of the engine overheating, and if they are there, slow down and find a suitable place to stop.

Driving with an overheating engine puts your car at risk and also the occupants as the probability of the engine blowing is high.

Before driving off, a good driver checks the engine oil and coolant levels, especially if they know that they will use the car for long hours.